SCOTTSDALE, Ariz., May 17, 2017 /PRNewswire/ -- The American concept of a "forever home," or a house that will last through all phases of a person's life, is outdated, according to Taylor Morrison's 2017 Consumer Survey. The survey, conducted by Wakefield Research earlier this year on behalf of Taylor Morrison, took a look at 1,000 U.S. adults who have purchased a home in the last three years, or who are likely to purchase a new home in the next three years. 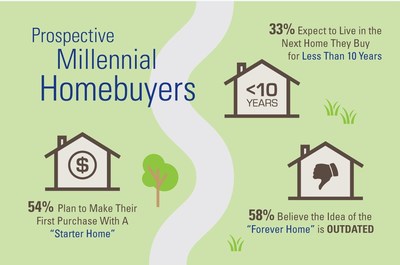 In fact, the survey found that more than half (58 percent) of prospective millennial homebuyers expect to change where—and the way—they live over time as their lifestyle evolves; the concept of a forever home is outdated. This sentiment is shared by 56 percent of all homebuyers. Additionally, the data shows that a third of these millennial buyers intend to live in the next home they buy for less than 10 years, with 80 percent equally or more interested in a newly constructed home over a resale home. Of all of those surveyed, 26 percent stated that the principal advantage they see in buying a newly constructed home over a pre-owned one is floor plans that fit their current lifestyle top the list.

"Understanding the lens in which homeowners and homebuyers are seeing the market is integral to our strategy," said Sheryl Palmer, Taylor Morrison president and chief executive officer. "In the last decade so much about the housing industry has changed—from locations where people want to live,  to the types of homes people want to buy. Taylor Morrison offers great homes in excellent locations for a wide range of lifestyles and demographics, and I believe our business model is aligned with what homebuyers want. We offer homes for every phase of life."

Prospective homebuyers have specific views on the type of home they wish to buy, and the expectation for higher mortgage rates does not seem to be swaying their decision. In fact, recent and prospective buyers both believe that owning a home is appealing enough that they would be willing to take on low double-digit interest rates before being deterred by the home-buying process, with millennial shoppers having an even higher rate threshold.

"While we are unlikely to see double-digit interest rates in the foreseeable future, consumers' tolerance for higher potential rates signal a real commitment among prospective buyers to make their home purchase a reality," said Tawn Kelley, Taylor Morrison Home Funding executive vice president and president of mortgage operations. "Customers appreciate that we may be heading into a rising interest rate environment and are not deterred by the potential for further rate volatility going forward. In fact, the buyers that Taylor Morrison Home Funding is attracting are well within their qualification range, and by using finance as a sales tool, we expect to see our home closings continue to climb."

Taylor Morrison Home Corporation (NYSE:TMHC) is a leading national homebuilder and developer that has been recognized as the 2016 and 2017 America's Most Trusted® Home Builder by Lifestory Research. Based in Scottsdale, Arizona, we operate under two well-established brands, Taylor Morrison and Darling Homes. We serve a wide array of consumer groups from coast to coast, including first-time, move-up, luxury, and 55 plus buyers. In Texas, Darling Homes builds communities with a focus on individuality and custom detail while delivering on the Taylor Morrison standard of excellence. 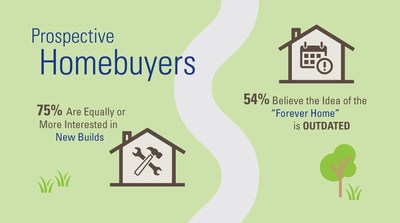