DALLAS, March 14, 2019 /PRNewswire/ -- Leading national builder and developer, Taylor Morrison, is expanding on its roster of lifestyle communities in the Dallas-Fort Worth area with the addition of two new communities, Sweetwater at Light Farms in Celina and South Oak in the City of Oak Point. 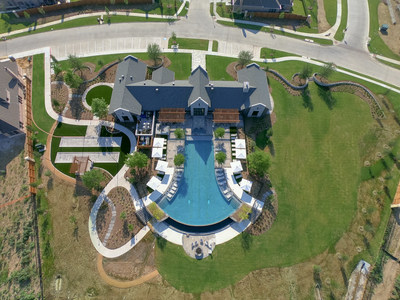 The homebuilder will also expand on its lifestyle amenities at Waterford Point at the Tribute in The Colony.

Now selling, new Taylor Morrison homes in Sweetwater at Light Farms offers residents access to private amenities in the active-lifestyle community within Light Farms. Homeowners who reside at Sweetwater will have access to their own community center planned with a swimming pool, all while enjoying the ample amenities that Light Farms has to offer, including a fitness center, volleyball and bocce ball courts, tennis courts, 13 miles of hiking and biking trails, green, open spaces, and a community center crafted from 19th century barn structures from New York's Mohawk River Valley.

Taylor Morrison will offer three collections of homes at Sweetwater with a total of 13 distinct floor plans to choose from and pricing that starts from the upper $200,000s.

"Our new Taylor Morrison homes in Sweetwater at Light Farms offer an exceptional lifestyle," said Dennis Ouellette, director of active lifestyle for Taylor Morrison Dallas. "As residents of an active-lifestyle community, homeowners will enjoy private amenities and a wide selection of single-story homes designed to be as beautiful as they are practical."

Added to Taylor Morrison's communities in Dallas-Fort Worth will be the new community of South Oak, coming soon to the City of Oak Point. This active lifestyle community will be a Taylor Morrison development with 236 homesites. The homesites will be released in two phases with 129 homesites released throughout the first phase of development and 107 released during phase 2. Homebuyers will be able to choose from two collections of homes and enjoy access to a planned central pond, and a planned community center, offering a host of amenities for the private use of residents. Located near Lake Lewisville, residents will also enjoy access to a variety of outdoor recreation, including boating, jet-skiing, fishing, swimming and more.

"South Oak will be a destination community that will allow residents to take advantage of Oak Point's great outdoor lifestyle," Ouellette said.

In Waterford Point at the Tribute in The Colony, Taylor Morrison will be adding a Pickleball court to its already enticing line up of community amenities that include a private community center and an Infinity pool overlooking Lake Lewisville, a catering kitchen, a fitness center with a Wellbeats™ virtual training system, a yoga room and outdoor Zen yoga garden, a private massage room, bocce ball courts, multiple outdoor lounge areas and more. Taylor Morrison released new homesites in the third phase of Waterford Point on March 9, 2019.

"Our expanded selection of lifestyle communities will mean homebuyers can choose the community that fits their interests and life-stage," said Ouellette. "With lifestyle directors on-hand in each of these communities, and social events and resident clubs and groups, those who live at our Sweetwater at Light Farms, South Oak, and Waterford Point communities can enjoy an enhanced home life with luxury amenities and recreation."