SCOTTSDALE, Ariz., March 10, 2021 /PRNewswire/ -- While traditionally a male-dominated workforce, the construction industry continues to evolve with more women choosing construction roles. From the c-suite, to the board room and construction site, women impact every aspect of business at national homebuilder and developer Taylor Morrison (NYSE: TMHC) as the company strives to transform the narrative around gender equality. 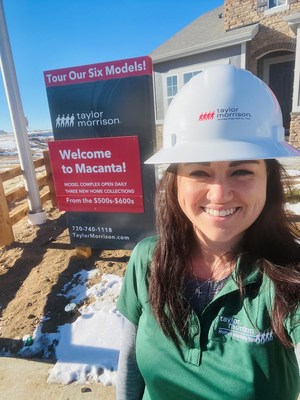 "There are so many career pathways and excellent opportunities for women in our sector, and we are thrilled to continue bringing more women into the conversation," said Charissa Wagner, Senior Vice President of People Development and Operations. "While many misconceptions remain in the field for women, we celebrate the progress within the industry and Taylor Morrison's consistent growth in female representation. Men and women bring intrinsic differences to construction, making us a stronger organization and homebuilder."

Taylor Morrison boasts a nearly equal male-to-female workforce representation, 53 and 47 percent, respectively, and was recognized for its advancements in gender equality with inclusion in Bloomberg's Gender-Equality Index for the third consecutive year. Across all markets, the homebuilder employs 56 women in construction-specific roles, including 18 superintendents, a 19 percent increase from last year and 60 percent increase in the last two years.

Alongside Leading Builders of America (LBA), who formed the non-profit Building Talent Foundation (BTF), Taylor Morrison strives to further increase these numbers to create a sustainable construction workforce and advance the education and career progression of young people in the industry. Taylor Morrison Chairman and CEO Sheryl Palmer serves as Chairman of the non-profit, which aims to place 100,000 new individuals in construction by 2030. Since launching last fall, BTF has already seen many successes including more than 50 career placements and nearly 100 interview submissions, as well as approximately 560 students graduating and 280 job openings with employer partners by July. The BTF also hopes to bring more opportunities to women in construction.

In honor of this year's Women in Construction Week, Taylor Morrison shares the stories of several female team members in various construction roles across the country.

After spending a year and a half as a purchasing agent at Taylor Morrison, Ali Rice was craving a new challenge that would allow her to be in the center of the build process. Seeing the homebuilder's commitment to gender equality, she felt comfortable stepping into a new role as an assistant superintendent in Denver, Colorado, and feels supported as she establishes herself in construction.

"To normalize women in the field and to turn it into something where no one blinks an eye are steps you have to be willing to take—and Taylor Morrison is leading the charge," said Rice.

Doubling as a Customer Care Manager and a Division Construction Coordinator Karin DeCicco closed nearly 40 homes in 2020, running home inspection and walkthrough punch lists as well as managing warranties and educating homeowners on maintenance and homeownership. With two young sons, who might step into the industry one day, Karin is raising them to see the construction field in a different light, with both men and women on a jobsite.

"I glow with pride knowing we have a female CEO and that is an incredible feeling," said DeCicco. "It is nice to have her as a mentor, even indirectly. There are certainly challenges for women, but I know it has made me a better person."

At just 27 years old, Kerin Schweigert is the youngest female superintendent at Taylor Morrison. Just six months into her role as a Sarasota Superintendent, she oversees the construction of 22 homes while also finishing her degree in Construction Management.

"It can be intimidating walking into a trailer or classroom and being the only woman, but at Taylor Morrison I am treated as a complete equal and my gender or ability to do my job are never questioned," said Schweigert.

About Taylor Morrison
Taylor Morrison Home Corporation (NYSE: TMHC) is the nation's fifth largest homebuilder and developer based in Scottsdale, Arizona, that has been recognized as America's Most Trusted® Home Builder for six years running (2016-2021). Operating under a family of brands including Taylor Morrison, Darling Homes, William Lyon Signature Home and Christopher Todd Communities built by Taylor Morrison, we serve consumer groups coast to coast, from first-time to move-up, luxury and 55-plus buyers. Our unwavering pledge to sustainability, our communities and our team—outlined in the 2019 Environmental, Social and Governance (ESG) Report—extends to designing thoughtful living experiences homeowners can be proud of for generations to come.